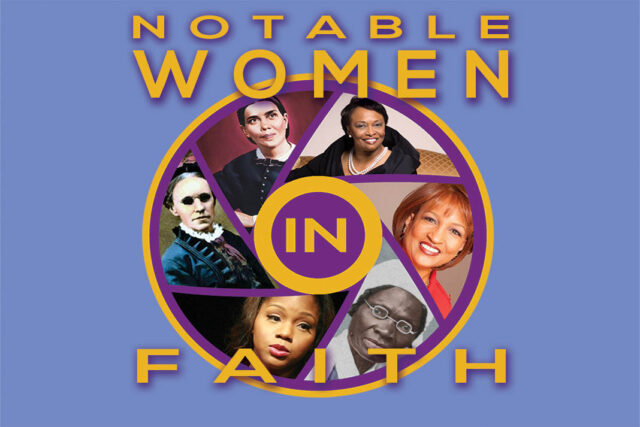 Notable Women In Faith: Past

“Pass Me Not”, “Blessed Assurance”, and “To God Be the Glory” are among the more than 800 hymns penned by America’s most prolific hymnist of the nineteenth century.  Despite becoming blind soon after her birth, Crosby was a great influencer in global church music and America’s poetry.  She wrote the first secular cantata by an American composer and was also the author of more than 1,000 secular poems using more than 200 pseudonyms.

A popular public speaker and preacher, Ms. Crosby was born in 1820 in Brewster, New York.  She would attend the John Street Methodist Church in lower Manhattan with her mother and grandmother, and later as an adult attended Sixth Avenue Bible Baptist, Plymouth Church and the Dutch Reformed Church in Brooklyn.

Crosby was an advocate for education for the blind and was herself a teacher at New York Institute for the Blind.  She has appeared before Congress on many occasions.  The dynamic Fanny Crosby had memorized most of the Bible, was a singer and a soloist, and could play the piano, guitar and other musical instruments.

It was said of Crosby, “had it not been for her affliction, she might not have been so great an influencer and she certainly would not have had so great a memory.  Crosby once wrote, “It seemed intended by the blessed providence of God that I should be blind all my life and I thank Him for the dispensation.  If perfect earthly sight were offered to me now, I would not accept.  When I get to heaven, the first face that shall gladden my sight will be that of my Savior.”

US Catholics Get First Black Cardinal

“Christian” Leaders Respond to the Inauguration of President Joe Biden