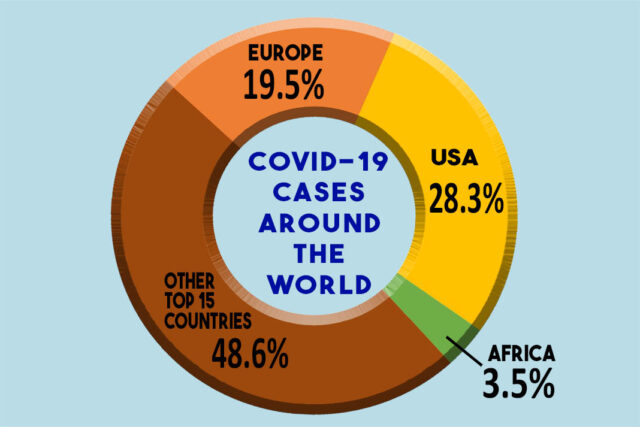 The Christian Times provides a weekly review on how the coronavirus pandemic is moving around the world, and its impact upon Europe, Africa, and America.  This flulike disease that started in Wuhan, China towards the end of 2019 has raced out of control, wreaking havoc across the world. The greatest impact is being felt in Europe and the United States of America.  Spain continues to have the largest number of cases in Europe, with Italy following a close second in number of cases but having the largest number of deaths.  America continues to be the country with the most cases and the most deaths but contends that the deadly virus has plateaued, and the worst is over. Among the major continents, Africa has the least number of cases and the lowest number of deaths.

According to The Christian Times report, the continent of Africa ranks the lowest in number of COVID-19 cases in comparison to the 15 top affected countries in Europe, the United States of America, and the top 15 affected countries in the rest of the world.  These top 15 countries in each regional category, including the USA, represent more than 78% of the total number of cases around the world.  Europe comprises 42.4% of these cases, the US 37.6%, the top 15 countries around the world 18.8%, and Africa only 1.2%.  Europe has the largest number of deaths at 59.1% and Africa the lowest with a little more than a half of a percent.  Africa’s COVID-19 death rate is 4.7%, whereas Europe’s is 17.4%

Among the nations around the world with the largest number of cases, America is at number 1, European countries occupy the next 7 spots, and the first African country, South Africa, is number 49 on the list.  The top 15 African countries have less cases than Belgium alone.

The Christian Times weekly coronavirus update provides data and updates on cases and the impact upon Europe, Africa and the United States.

An American President & His Pulpit of Hypocrites

THOSE WE’VE LOST – From the Clergy