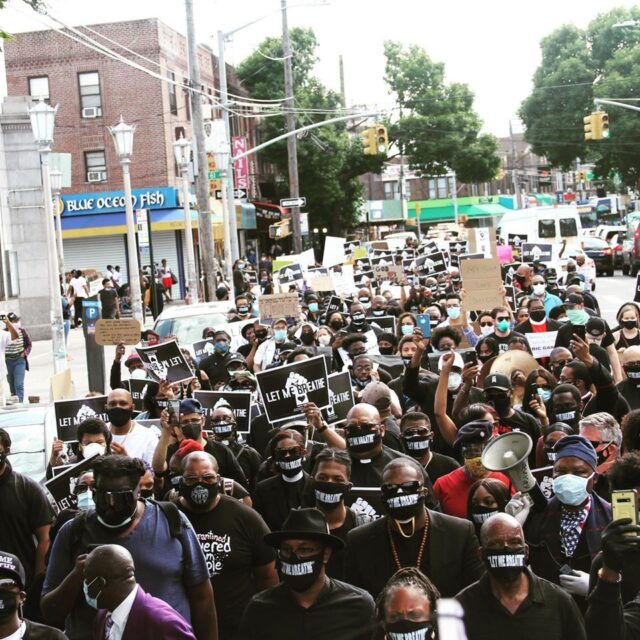 Members of the faith community of Brooklyn joined the calls for justice, police reform, and the end of all forms of racism at the “Let Me Breathe” March and Prayer Rally on Sunday, June 7.  The event was organized by pastors of churches in Flatbush and East Flatbush as well as community leaders in solidarity and support of George Floyd, Breonna Taylor, and the countless others whose lives were lost at the hands of the police.

As protestors marched from Church and Utica Avenues to the steps of Grace Deliverance Tabernacle at 650 Remsen Avenue, echoes of the united calls could be heard through the streets of Brooklyn.  Along the route, male and female clergy of various ages and races led the crowd with prayers, declarations, and chants of “A people united will never be defeated,” “No Justice, No Peace,” “Enough is enough,” and “Black Lives Matter.”

The March was well supported by youths of the community.  Two young people of East Flatbush Village passionately addressed the really, and The Blue Angels Drumline helped to keep protestors in step with rhythmic beats throughout the March.

During his address to the fired up rally, Bishop Orlando Findlayter charged elected officials, “Go back to Washington, go back to Albany, go back to City Hall and make some changes.  Criminals in blue jeans or blue uniforms should go to jail.  Chokeholds should be illegal across the State of New York and the United States of America.  If you call 911 falsely on anyone, it should be made a hate crime.  Part of our problem is that the police are responsible for policing the police.  We are saying to our legislature we want legislation to make the Attorney General a special prosecutor to investigate all police involved killings because no one can police themselves.”  Findlayter also appealed to the crowd, “Besides marching, complete the Census so we can get the representation and resources we need for our community, and vote.”

Recently, The GodSquad announced its #SafeSummer2020 Campaign. Together with the local precincts, CMS service providers, clergy councils, faith-based organizations, and elected officials, the goal is to implement a comprehensive, community plan to help decrease the involvement of young people in street groups, crime, and gun violence over the next three months and provide the necessary resources to help reduce gun violence in Brooklyn and beyond.

The plan will include employment for young men from the Flatbush Leadership Academy (FLA) program to help assist with the Social Distancing Engagement that will target youths in the City. The GodSquad has called on other organizations and elected officials to join the effort to provide summer employment for 900 youths for 90 days throughout the summer and actively seek funding sources to create opportunities for them.