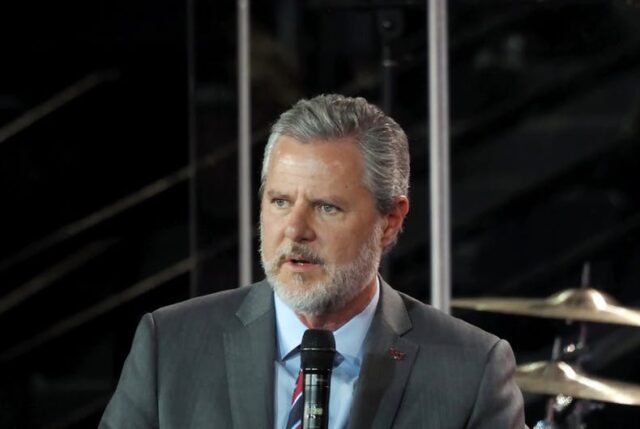 Black employees at Liberty U have started resigning after University Prez Jerry Falwell, Jr. made a racist tweet on May 27 featuring an image of blackface and someone in a KKK hood

On May 27, Jerry Falwell, Jr. made the twitter post after Virginia Governor Eric Northam issued an executive order requiring state residents to wear facemasks in public to help slow the spread of COVID-19.  Falwell’s opposition to facemasks isn’t surprising as he reopened Liberty University during the epidemic, leading to a dozen students getting sick.

In early 2019, Northam had faced calls to resign after an image from his medical school’s 1984 yearbook showed a picture of him in blackface standing next to someone wearing a KKK hood. In the tweet about Northam’s executive order, Falwell said he would only wear a face mask if it could have that racist yearbook image printed on it.

In response to Falwell’s tweet, 35 Black Liberty University alumni wrote a 2-page public letter to him calling for his resignation and stating that they were “disappointed and deeply grieved by his incendiary rhetoric which has repeatedly violated and misrepresented Christian principles.”  They said they would stop urging students to attend Liberty, would no longer donate to the University, and would urge fellow people of faith to avoid speaking at the school unless Falwell changes his behavior or steps aside. A petition associated with the letter also gained nearly 40,000 signatures.

Additionally, Keyvon Scott, a Black admissions counselor at the university, announced his resignation because he said he could no longer encourage attendance at a school with “racially insensitive leadership and culture.”  LeeQuan McLaurin, the former director of diversity retention, also resigned, as did Black professor Christopher A. House, who is also a tenured professor at Ithaca College.

Falwell initially shrugged off the Black alumni’s concerns.  However, two weeks later, on Monday, June 8, in response to the growing outrage, Falwell deleted the tweet and “apologized” in multiple tweets.  “After listening to African American LU leaders and alumni over the past week and hearing their concerns, I understand that by tweeting an image to remind all of the governor’s racist past I actually refreshed the trauma that image had caused and offended some by using the image to make a political point.  Based on our long relationships, they uniformly understood this was not my intent, but because it was the result I have deleted the tweet and apologize for any hurt my effort caused, especially within the African American community.”

Following his “apology”, Falwell said in an interview that he was unaware of the staff resignations and dismissed staff departures, saying that the university has 9,000 employees.  His wife, Becki, added that the school’s human resources department told her that about 35 people stop working for the university each week.  Additionally, Falwell was dismissive of the letter signed by the Black alumni, saying it was a very small percentage among the thousands of graduates of the school.

“The tweet was aimed at the governor,” Falwell said.  “It accidentally offended them.”

Another African American staff member, who spoke on the condition of anonymity, said Falwell’s tweets were “a cherry on top” of other race-related issues at the school.  “It seemed like once donors said I’m not going to put money into your university, that’s when he says, ‘I’m sorry, I apologize,’” she said. “It’s too late!”  She said staff members fear losing their jobs, and faculty do not receive tenure.

“You know how back in the slavery days Black people would ‘disobey’?  Or they would go against the master?  They got whooped for it.  They would lose a limb.  Well, that limb is you losing your job,” she said.  “It’s like, ‘Sit down, shut up and do your job.’  You lose your job, lose your benefits.”

In addition to “apologizing”, Falwell said he might make Martin Luther King, Jr. Day a holiday at the school, local CBS station WDBJ7 reported.  Although the day is already a holiday at both the federal and state level, it is not currently recognized by Liberty University, which used that date in 2016 to host an event by then-presidential candidate Trump.