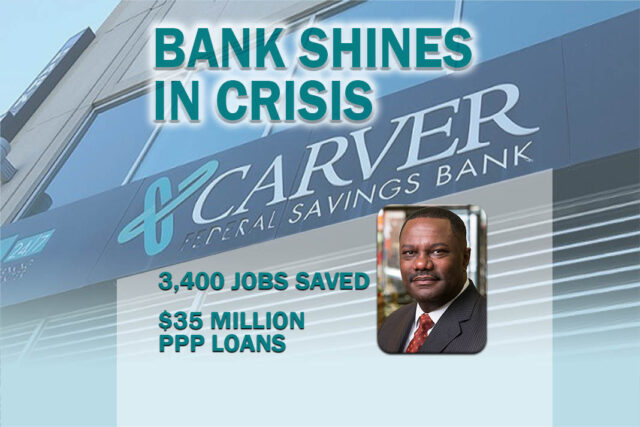 As part of a large financial institution, it was commonplace to see a relatively small number of people of color in senior leadership positions,” Pugh told The New York Christian Times.  “At Carver, I not only have the opportunity to mentor but also uplift and promote people of color and women to senior level positions.”

Pugh expressed his opinion about what he sees is a discrepancy between talent and opportunity. This, he said, is a contributing factor in the sidelining of non-Whites.   “When you think about talent, it is something fairly distributed in that we all have some degree of a gift to offer. But not so with opportunity. So the issue is that people of color and women are not given the opportunity for advancement despite having great skills.  My decision to join the Carver family was influenced by a desire to be a part of the solution to that problem.”

And so it is. At present Carver boasts of a Board of Directors composed of 100 percent African and Caribbean Americans, 30 percent of whom are women. According to Pugh, they are all people with skills and talent backed by a commitment to see the Carver mission being served every day. “There is no greater place to be than with an organization that stands behind what it believes,” he said.

To fully appreciate the Carver mission, it’s important to take a peep into the history of the institution that started back in 1948. Not only was the prevailing culture at the time one of “if you’re Black, stay back,” it was doubly so when it came to borrowing from financial institutions. The color of your skin trumped the zeros in your bank statement and so the big banks were not lending money to anyone in Harlem, not even the middle class. But the need for home and business loans was real.

So instead of rolling over, some local civic leaders, small business entrepreneurs, and faith leaders came together and started their own bank. After its application was denied by New York State, the Board of Directors appealed to Washington, D.C and finally gained federal approval. The first branch opened in 1949 and was named after contemporary era scientist George Washington Carver. Carver Bank was not only a pioneer in the banking business, but its original Board included women of color. Seventy-two years later, the bank still continues to focus on economic empowerment for communities of color and growth and expansion of small business enterprises.

With seven branches located in Harlem, Brooklyn and Queens, Carver continues to be laser-focused on minority- and women-owned businesses and is a champion for their growth and sustainability. In addition to the brick and mortar branches, Carver has account opening capacity through Carverbank.com in nine states from Massachusetts to Virginia. The Bank’s asset base of $620 million and 135 employees has earned it the label as a community development financial institution (CDFI). CDFI is a designation made by the US Department of Treasury that requires at least 60 percent of every dollar on deposit to be reinvested in the community served.

“I am proud that at Carver we have exceeded this minimum requirement and today 80 cents of every dollar we have in deposits is reinvested in the community,” said Pugh. “I often advise people who are shopping for a financial institution to ask for its Community Reinvestment Act (CRA) rating. Carver is proud to say that for three consecutive years we have received an Outstanding rating, which is the highest possible.” According to Pugh, over those three years, Carver has also contributed 15,000 hours in financial education, wealth building skills, and small business empowerment programs.

An old adage reminds us that when the times get tough, the tough get going. In this age of the COVID-19 pandemic, Carver Bank has certainly positioned itself as a tough backbone for communities of color, evidenced by its participation in the Federal Stimulus.  Through the Payroll Protection Plan (PPP), the Bank doled out thousands of dollars in loans to many small businesses and saved countless jobs in the process.

“Under the PPP, we have been instrumental in throwing a lifeline to small businesses,” said the CEO. “We were able to lend $35 million to small businesses and preserve 3,400 jobs. For many small businesses this program is just a starting point because we are putting a significant amount of time into helping them re-engineer for the other side in terms of e-commerce. Our bankers and lenders are focused on holding the hands of our customers and walking them through the critical steps as we all navigate these challenging times.”

One of the businesses who benefited under this program is Public Housing Communities, Inc., a 15-year-old non-profit which helps NYCHA residents in search of jobs and training. The company’s CEO is Charlene Nimmons and she was moved to tears in her praise for the lifeline received from Carver Bank through a payroll protection loan. “We have been banking with Carver since 2006 and thank God we stayed with them through the years because when this pandemic hit, we needed a friend.”

According to Nimmons, it was at the end of April and they were at the end of their rope. “We were down to our last payroll, and navigating the process to get stimulus help was like a spider’s web. Fortunately, at Carver we were assigned a banker by the name of Onika who stayed with us for the full distance and even on the last day took her personal time on the weekend to ensure that the check was in hand. We were able to make our payroll, keep our employees, and have been sustained through this time.”

Faith-based institutions have not been excluded from Carver’s helpline as the bank has designed programs to help clergy leaders think about operating with and reaching their congregations in this virtual era. In terms of the general community, Carver is working in cooperation with CBOs such as the Madison Square Boys & Girls Club to make sure that youth and families have the support they need. This has extended into 12,000 pantry bags of healthy choice foods being distributed.

With an infusion of capital from Morgan Stanley, Carver is continuing its work, and the Bank’s president is excited about the partnership. Morgan Stanley recently announced $14.6 million to bolster Carver’s capital position to help weather the economic impact of COVID-19. In addition, the grant will help the bank assist small businesses and customers that were affected by COVID-19, particularly those who did not receive federal relief loans. The grant also supports Carver’s continued mission to provide capital and banking services to minority- and women-owned businesses in New York.

So satisfied is he with his time at Carver Bank that Pugh says that as long as he is making a difference, he plans to be with the organization for years to come. For the immediate future, he plans to take Carver through an intense focus on its digital platform “because we know that it’s important for small business.”

“Traditional banking will continue to be an important part,” he explained, “but we must have a robust digital platform. We have spent – and will continue to do so – a significant amount of money in rolling out programs with solutions to small businesses and customers in general to bridge the digital divide.”

In a moment of somber reflection, Pugh said that there are many lessons we have learned from this pandemic. “One of them is that a relationship with your financial institution is much more important than being able to walk into a bank branch on every street corner. While that is important,  so too is  –  in times like these – having a relationship with senior level people at your bank who are able to respond and make a decision about what you need in that moment,” he said.

With Carver’s reputation as a bastion for Black economic empowerment, it’s safe to say: prayers answered!