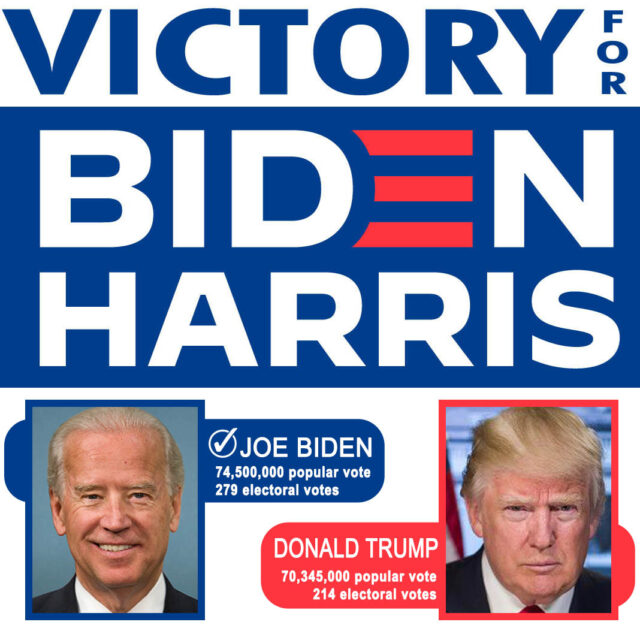 2020 is a record-setting election year that saw more than 100 million American voters rushing to the polls before Election Day.  Lines of energized voters wrapped around buildings were a popular sight all across America in the days leading up to an election that was riddled with contentious innuendos, verbal insults, and partisan rancor.

Election Day, November 3, came and there was neither a concession speech nor a victory celebration.  Four days after the polls closed, incumbent candidate President Donald Trump and challenger Joseph Biden were still in anticipation of the results of a “too close to call” election.  The impact of the coronavirus pandemic and an intense wave of racial unrest have spurred America into an unprecedented crisis with record unemployment, huge business losses, and heightened tension amidst outlandish rumors and weaponized conspiracy theories swirling from the White House and the tweeting fingers of Donald Trump.

In the end, it is the American electorate that has the final word, and all the major news media outlets have projected the election for Joe Biden.  As of today, Saturday, November 7, almost 150 million votes have been counted with Biden receiving some 74,500,00 compared to 70,350,000 for Donald Trump.  This is a new record for the largest number of votes cast in any U.S. presidential election, but America’s elections are decided based on the electoral college votes.

According to the Constitution, each state is required to appoint a number of electors which make up the Electoral College, which would then elect the president and vice president.  There are currently 538 electors in the Electoral College; California, the most populous state in the union, has 55 electors, Texas has 38, and Florida and New York each have 29.  An absolute majority of Electoral College votes, which is 270 or more, is required to elect the president and the vice president of the United States of America.  While Americans continue to debate the appropriateness of this Electoral College voting system – particularly considering the fact that candidates can win the popular vote and yet lose the election, as was the case for Hillary Clinton in 2016, all states (and the District of Columbia) use a statewide popular vote on Election Day to select electors in a system where the winner takes all.

As of today, Saturday, November 7, Trump has received 214 Electoral College Votes, and Biden has received 279, making him the President-Elect of these United States of America.

Preliminary reports show an estimated 35.7 million Americans were early in-person voters and more than 64 million voted by mail.  Also noteworthy is the fact that an estimated 20 to 30 million more Americans voted this year than the 138 million voters who went to the polls in 2016.

THE POWER OF THE BLACK VOTE

Exit polls are also very strong indicators that Joseph Biden has benefitted greatly from the power of the Black vote.  In the post-Election Day tallies, the pendulum swung from Trump to Biden in swing states like Michigan, Pennsylvania, Wisconsin, and Georgia – heavily because of the preponderance of Black votes in major cities like Detroit, Atlanta, Philadelphia, and Milwaukee.  Blacks and Latinos went to the polls in record numbers given the wave of racial tension and the totalitarian and xenophobic posture of this American president.  An attempt at voter suppression may have also had an opposite effect as more voters with a sense of disenfranchisement were motivated to journey to the polls.  Efforts to discourage mail in votes did not work, as is evidenced by the record number of people who voted by mail.  As it turns out, Biden benefitted greatly, with some 90% of the Black vote and 65% of the Latino votes, and it was this voting power that will send him to the White House when all the votes are counted and the victory is officially won.

“Christian” Leaders Respond to the Inauguration of President Joe Biden