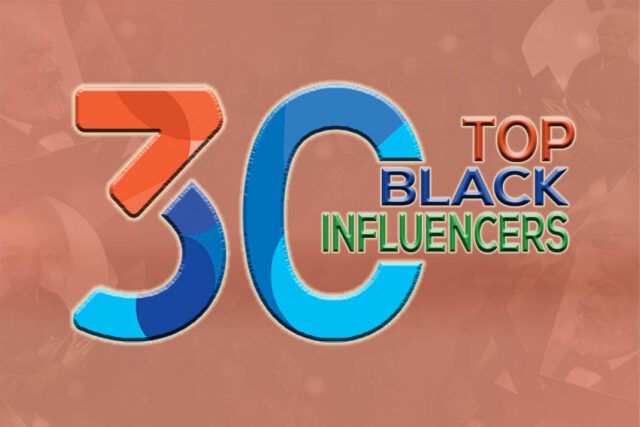 Men and women are courageously blazing trails and dutifully serving communities in their vocations and avocations, and as Black America continues to rise and shine, they are helping to shape a powerful and progressive future.

The power of a race and the rise of a nation are intrinsically linked to the will, talents, strength and conviction of an endless list of pioneering leaders – unfettered in their resolve and commitment to help transform lives and reform communities.  In every field of engagement and in all lines of work, Black men and women are making a difference and are forging ahead despite the billows of racism and the difficult climb to shatter glass ceilings.

In business, faith and politics; healthcare, labor and civil rights; media, sports and the arts, the men and women listed below are among the true leaders who truly make America great.  They are trendsetters, pioneers and today’s history makers.

These 30 Black Influencers (listed alphabetically) top The New York Christian Times’s 2021 list for their hard work and commitment, particularly during a pandemic and an intense season of racial and political unrest.  Their exemplary leadership has garnered our admiration and attention, and leaders of key institutions including The Greater Harlem Chamber of Commerce, One Hundred Black Men of New York and The NAACP were collective in their acknowledgment and salute of these trailblazers.

EDITOR’S NOTE: In a commitment to highlight and promote the powerful examples of individual and organizational leaders making history and transforming communities across many sectors, including education, arts and entertainment, health, business, STEAM, civics, civil rights, sports, arts and culture, politics, media, and faith, The New York Christian Times in partnership with The Greater Harlem Chamber of Commerce presents our annual list of The Top 30 Black Influencers.  This prestigious college of influencers was carefully selected through a nomination process that included key leaders from organizations including The Greater Harlem Chamber of Commerce, NAACP, New York Urban League, Prince Hall Masons, Congressional Black Caucus, Black Media Alliance, Association of Black Journalists, and 100 Black Men of New York.

Brooklyn HON. ERIC ADAMS became the first Black elected President of the Borough of Brooklyn and assumed office in January 2014.  This was just another step the Brooklyn native climbed in a beautifully checkered career that began in 1984 after he graduated from the New York City Police Academy and started working as a police officer with the New York City Transit Police.  He rose through the ranks and retired as a deputy inspector before a successful run for New York Senate, representing the 20th Senatorial District in Brooklyn.

Adams is one of NYC’s most visible and vocal voices on a broad array of issues that affect Black and Brown communities, and speaks out against police abuse and racial profiling.  He was president of the Grand Council of Guardians, an organization of Black law enforcers, and co-founded the advocacy group 100 Blacks in Law Enforcement Who Care.  Eric Adams continues his trailblazing work and is not only an advocate for the borough he presides over, but he also champions causes like healthy living, immigration reform, fair housing and real estate development opportunities, social justice, equal opportunities for quality education, and a safe city for all New Yorkers and visitors.

Eric Adams is now a candidate for Mayor of America’s largest city.  As he navigates his away across the city, he shares his passion to give every New Yorker a fair shot to get ahead.