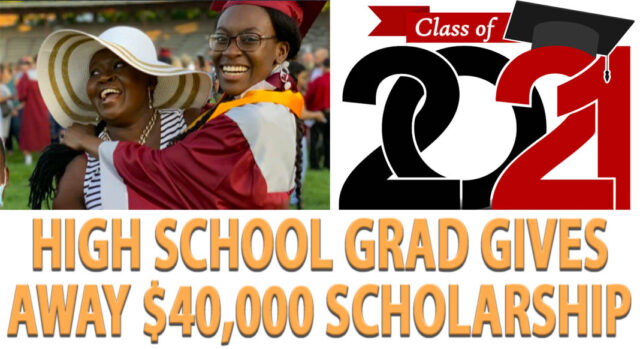 This brilliant high school graduate now a Harvard-bound student, who accepted her school’s General Excellence Award during the June 4th graduation, was moved by remarks from the school’s vice principal who spoke about selflessness and compassion towards others. True to herself and driven by her conviction as a Christian, Tetteh took to the podium at her graduation and uttered the following: “I am very grateful for the scholarship, but I also know that I am not the one who needs this the most. My mother went to a community college and that was very helpful. I would be grateful if the administration would consider giving this scholarship to some deserving students who are going to community colleges.”

Ms. Tetteh’s unselfish gesture brought the house down with a standing ovation. This, of course, ahead of her negotiation with Fitchburg‘s principal Jeremy Roche around the re-awarding of the coveted scholarship that spans four years at $10,000 each year.

As a child, Verda was brought to the United States from Ghana by her devoted and caring mother. Their faith in Christ is strong and Tetteh credits the example of her mother for her growth and educational success. “My mother taught me the value of education and I am inspired by her resilience,” Tetteh shared.

Tetteh’s mother earned her bachelor’s degree at the age of 47 and has been constant in her push for Verda to achieve academic excellence. And her efforts are paying off. The vibrant student is on her way to Harvard on a pre-med track and is the recipient of several scholarships. Now she wants other students to be able to get a higher education without worrying about money.

With the June 4 graduation speech and scholarship gesture garnering national attention, it is almost a sure thing that Tetteh’s George K Progin 4-year scholarship will be divided among 8 students. According to school district superintendent Robert Jokela, this re-gifting of a scholarship has never happened before, “but as we know, there is always a first time for everything,” he noted.

“While my mom was going to community college, she was working a lot to pay for tuition. That takes a toll on one’s physical and mental health and robs us of family time. So I am hoping that this money going to some community college students will help to alleviate that financial pressure,” Verda Tetteh contends.