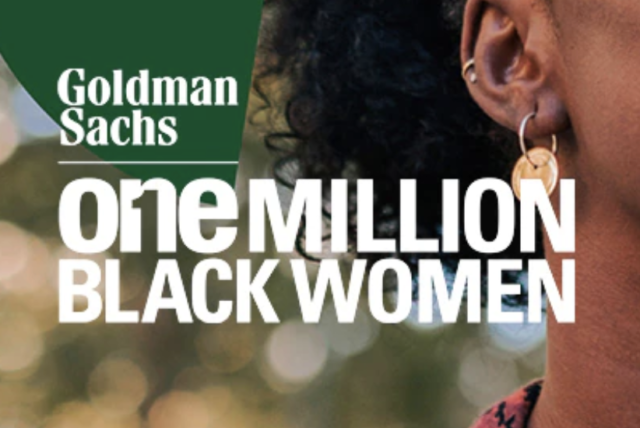 Goldman Sachs kicked off the New Year with a round of investments as part of its One Million Black Women Initiative, named for the bank’s goal of impacting the lives of at least 1 million Black women by 2030.  The investment bank is committed to spending more than $10 billion over the next decade to advance racial equity and economic opportunity for Black women and $100 million in philanthropic support to address the dual disproportionate gender and racial biases that Black women have faced for generations, which have only been exacerbated by the pandemic.

The series of 17 new investments, partnerships, and grants reflects One Million Black Women’s ongoing commitment to invest in the core pillars of healthcare, job creation and workforce development, education, affordable housing, digital connectivity, financial health, and access to capital that impact Black women at every stage in their lives.  Many of the organizations were identified through the more than 50 One Million Black Women listening sessions held with nearly 20,000 Black women from around the country, and the One Million Black Women Advisory Council.

New investment capital will be provided to expand the impact of the following seven organizations and entrepreneurs across the country:

New philanthropic grants will be provided to expand the impact of the following six organizations across the country:

Four new partnerships will support the work of the following organizations:

“We are proud to lift up the brilliant work of organizations positively impacting Black women and girls,” said Asahi Pompey, Global Head of the Office of Corporate Engagement and President of the Goldman Sachs Foundation. “The systemic gender and racial biases Black women have faced won’t be reversed overnight, but with continued investment, coordination, and focus, we have good reasons to be optimistic.”