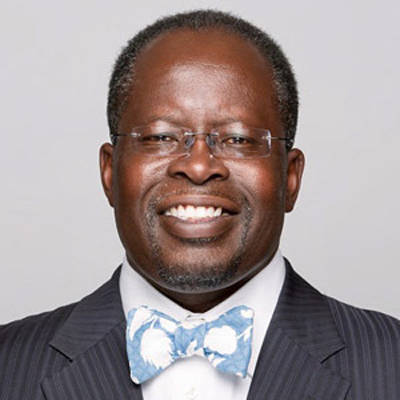 Under the umbrella of Academic Affairs, Latimore is charged with enhancing programming to support ongoing critical theological research and engagement on the legacy of enslavement and enriching the formative experience of seminarians.

Latimore’s teaching and research interests focus on the intersection of religion, race and economic justice through the examination of how economic ideological pre-suppositions underlie many of the disparities and inequalities witnessed in African American communities and their impact on the theology of the Black church.

Latimore comes to Princeton Seminary from Tennessee, where he served as senior pastor at Fifteenth Avenue Baptist Church in Nashville, taught at Belmont University, acted as a minority student mentor, and was associate director for the Academy of Preachers. He earned his doctorate from the University of Chicago, his DMin from McCormick Theological Seminary, his MDiv from Duke Divinity School, and his BA from Harvard University. Before attending seminary, Latimore had a successful career in investment management and economic development.

“When considering a person to fill the director position, my dream was to have someone who could help Black students discern their vocational goals in addition to helping them build networks while in seminary so they could be in a great position to find jobs after graduation,” says Jalen Baker, MDiv senior and moderator for the Association of Black Seminarians. Baker was also a member of the search committee. “Dr. Latimore got my vote because he is a brilliant scholar and pastor whose empathy and well-rounded theological expertise will be a gift to all students and faculty at Princeton Seminary. He’s just the person to step into this role and aid the Seminary in becoming the covenant community we are striving to be here and in the world.”

Princeton Theological Seminary, founded in 1812, is the first seminary established by the General Assembly of the Presbyterian Church.  This appointment marks another significant milestone in the implementation of a multi-year action plan to repent for the Seminary’s historical ties to slavery. The Center has been named for Betsey Stockton, a prominent African American educator in Princeton during the antebellum North and a Presbyterian missionary in the Sandwich Islands (present-day Hawaii). Prior to her emancipation in 1817, Stockton was enslaved by the chair of Princeton Seminary’s Board of Trustees.

“Today, the Betsey Stockton Center for Black Church Studies has the potential to be a beacon of light in theological education and for the church at large,” says Baker.