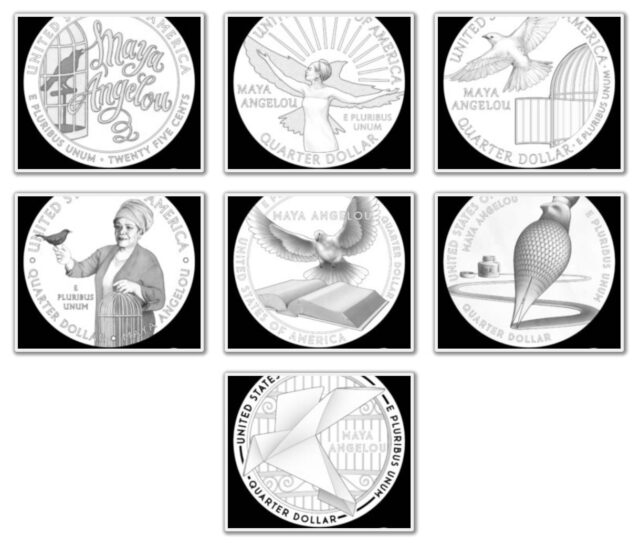 As part of a new program to honor history-making American women, Dr. Maya Angelou will be featured on a new edition of the quarter set to be issued in January 2022.

The majority of the United States’ circulating coins depict men.  Aside from the allegorical Lady liberty, however, American women have largely been relegated to collectible and commemorative coins.  Come next year, two new faces are set to appear on our quarters.  Writer Maya Angelou and astronaut Sally Rider will be the first individuals honored through the U.S Mint’s four-year American Women Quarters Program.

Between 2022 and 2025, the Mint will release up to 20 quarters recognizing women from diverse fields, including suffrage, civil rights, government, abolition, humanities, science, space and the arts, to name a few.  The coins’ front side will feature a revamped design depicting George Washington.

The U.S. Mint has announced seven different designs (next page) in honor of Angelou’s contributions.  All reference the poet’s famed 1969 autobiography, I Know Why the Caged Bird Sings.  One portrays Angelou holding a cage in one hand and a blackbird in the other. Another design shows Angelou with her arms outstretched against a bird-shaped backdrop. Ride, the first American woman in space, will be honored with five designs testifying to her work as both an astronaut and educator.