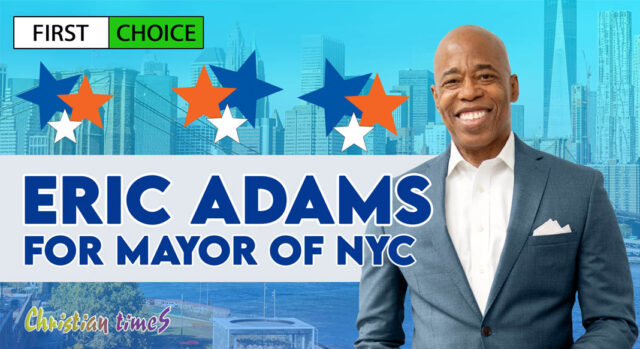 Brooklyn Borough President Eric Adams has his eyes set on New York City Hall because he believes he has the vision and experience to captain this City through the economic storm looming over its head and to bring more efficiency, effectiveness and equality to government. In an interview with The New York Christian Times, he rolled out his plan to do so, which includes a concentrated focus on public safety and clearing up the dysfunction at City Hall.

“City Hall is dysfunctional and we can no longer afford to operate that way,” he said. “So in my first 60 days I am going to assemble the Commissioners of all City agencies and instruct them to clearly define their mission.” The aim here, said Adams, is to make sure that one agency is not focused on a mission that’s creating a crisis for another. “For example, The Department of Health and Mental Hygiene spends millions of dollars fighting childhood obesity, childhood diabetes and childhood asthma,” he said. “On the other hand, the Department of Education is feeding our children 960,000 meals a day with foods that cause childhood, obesity, diabetes and asthma.”

As Borough President, Adams used both the resources of the office and his personal experience to combat these issues. He put $165 million into the school system to upgrade technology and health priorities. On a personal level, in 2016 when chronic diabetes reared its hideous head in his life, the accumulative resilience of what he calls “fighting moments” packed the transformative power to not only change his health trajectory but his life. He became a champion of health and healthy living, and documented his journey in the book: Healthy at Last: A Plant-Based Approach to Preventing & Reversing Diabetes and Other Chronic Illnesses.

On his other hotbed platform issue of public safety, Adams has also brought his personal life experience to bear. As both a New York City Police Officer and a victim of police brutality, he has viewed the gun from both ends. “Getting this city back to economic safety is directly tied to public safety,” he said, adding, “Therefore, it is a priority to get gang violence under control.” His day one plan as Mayor will be to reinstate the disbanded plainclothes anti-crime unit and turn it into an anti-gun unit. “We need to have precision policing that targets known gang leaders and shooters,” he said. “Without public safety we will continue to hurt our tourism sector and ultimately our economic recovery.”

As a police officer, Adams co-founded 100 Blacks in Law Enforcement Who Care, an advocacy group for Black police officers, and often spoke out against police brutality and racial profiling. After 22 years on the job, he retired from the NYPD as a Captain to run for political office, and in 2006 was first seated as State Senator for the 20th Senate District and earned the reputation as a bold crusader.

As the first African American to hold his current position, Adams became the highest-ranking Black elected official in America’s third largest city in 2013 and took over Borough Hall with a big game mentality. He worked assiduously to make the popularity of Brooklyn’s brand translate into prosperity for its residents. He opened up Brooklyn Borough Hall in ways that it never had been, allowing thousands of people to connect for the first time with government and civic life. In the upcoming June 22 elections, New Yorkers will be using ranked-choice voting citywide for the first time since it was approved by voter referendum in 2019. One of the limited number of polls conducted