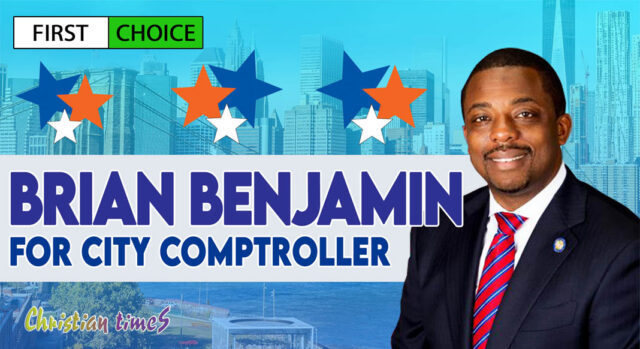 Brian Benjamin for city comptroller. Brian was born in Harlem to an immigrant mother who had come to this country with hopes for a better future for her son. Brian has always believed in New York City as a place where anybody can achieve their dreams, and after earning his undergraduate degree in Public Policy from Brown University and an MBA from Harvard, Brian returned to Harlem to start his career.

Brian has devoted himself to fighting for causes he believes in and to applying his financial expertise to better his community. That’s why he led the fight to pass the Eric Garner Anti-Chokehold Act in the wake of ongoing police violence in communities of color. It’s why he joined a company to develop over one thousand units of affordable housing in New York. And it’s why he is running for Comptroller: to better New Yorkers’ lives by drawing on his unique skillset and life experience.

Brian served as Chair of his Community Board before being elected to represent Harlem and the Upper West Side in the State Senate in 2017. In the Senate, Brian serves as Chair of the Budget and Revenues Committee and has distinguished himself as a leader in criminal justice reform and tenant protections. Brian sponsored a bill to prevent landlords from drastically increasing rent on rent-stabilized apartments, and he successfully fought to divest New York’s public pension funds from for-profit prisons.

With his own parents retired on a pension, Brian knows how critically important the role of Comptroller is. He is ready to apply his passion for making our city a just and affordable place to live and his financial expertise to benefit all New Yorkers. Benjamin for City Comptroller is running with two goals in mind: to maximize the pension returns for New York’s retirees, and to use the powers of the office to create a fairer New York City. To that end, Brian has built this platform during the course of the campaign to show New Yorkers how he will handle powers and responsibilities that come with serving as Comptroller.  Significantly, this platform can all be accomplished with the powers vested in the office of the comptroller. This is not a wishlist or a platform for a would-be mayor; this is a set of plans based in Brian’s experience as a financial manager, his knowledge of what the city needs to recover and become more equitable, and the unique powers of the office for which he is running.