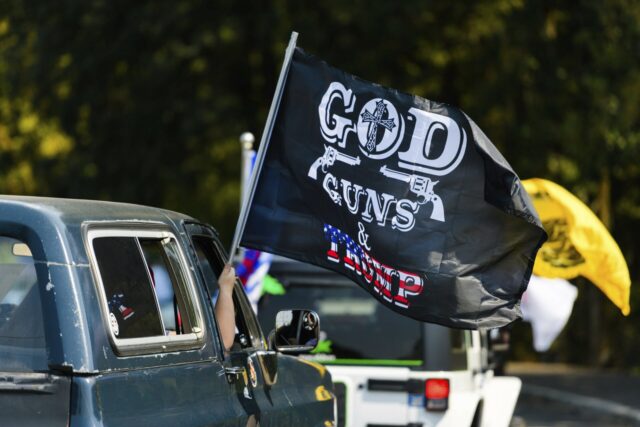 I recently watched in disgust and amazement the venomous preaching of a White evangelical minister, cheered on by the rousing applause and super-generous shouts of praise from his packed congregation.  With almost every word cloaked in a christological trenchcoat, this young, articulate southern pastor correctly speaks of an end-time of reckoning and the release of God’s judgment upon America but woven with a murky thread of disdain and boastful rejection of any and everything that is not White, Eurocentric and, of course, the America he sees.

He is pitifully a splendid representation of White supremacy, Nazi-style nationalism, and one among tens of thousands of Bible-touting men and women who are either confused about who Jesus is or have chosen to deliberately use the pulpit, the pew, and the parish to influence the vulnerable in defense and protection of White supremacism and White Power.

Obviously, these words were never used but those who understand the power of preaching and the evangelistic mission to win the “lost” and bring hearers to a place of decision get to see the irony.

Using the heated political topics of abortion and LGBTQ+ rights as his two core issues, he said all Democrats are evil and that the democratic party is demonic and the party of the devil.  And in his strongest statement, he referred to January 6 as the tip of the iceberg and called it a God-orchestrated agenda.

“They think January 6 was some big insurrection – that was nothing.  We are just getting ready, and God is gonna do stuff that will shake the foundation of America.  This evil must be uprooted and we will do whatever is necessary to fight for and save this country,” he braggadociously proclaimed.

This troubled pulpiteer is not a new voice, and his message is not a fresh word.  He and thousands of others are misusers of the pulpit and the political podium in their distressingly futile efforts to return America to White male domination – some believe it to be the Christian way!

This would be a good time to talk about love, Jesus’s message of peace, and His passionate plea for global unity, justice, and equality.  However, indulge my departure to address this preacher’s flagrant disregard or stubborn refusal to bring to his pulpit the demonic powers and the evils of guns.  Guns are created to kill, to inflict pain, and, in some cases, one gun is designed to kill multiple people at one time.

Only days before his fiery, politically charged sermon, ten innocent Black shoppers were brutally gunned down in Buffalo, NY and 21 people – mostly children and Latinos in Uvalde, TX – were killed by military-type rifles.  A loud cry to save the unborn and yet not a mumbling word about the brutal slaying of innocent children sitting in their classroom.

I am deeply bothered by the irony that the same bold defenders of life are the blazing protectors of guns.  And it is no irony that victims of gun violence in America – and many of the mass shootings – are Black and Brown, and the shooters are mostly Whites with nationalist and White supremacist tendencies.

At the core of America’s right to bear arms is the slave master’s right to keep “his slaves” under control, and to this very day, the gun is an instrument of control and a symbol of power and supremacy to a significant percentage of the US population.

Given the kind of progress that Blacks and suppressed people have made in less than 160 years, it is not difficult to understand why some Whites in America are so fear-filled:  the rapid rise of Barack Obama to the presidency, the growing list of Black billionaires, the truth of Black women shattering glass ceilings that their White counterparts have failed to shatter, and the fact that even on an uneven playing level, Blacks are keeping pace with their counterparts. White power and control are being neutralized and the Donald Trump kind of Americans despise such a reality.  The gun is the only symbol of White power that is left.  Letting this one go is hard regardless of its toll and impact on our children.

Thus, in this gun reform conversation, “America descends from hopeful and progressive to being locked in the permanence of perpetual impossibility,” Trevor Noah noted.  All things are possible for America except gun reform:  space tourism is possible, a self-driving car is possible, drone deliveries are possible, excellence in sports, aviation, and technology is possible, and yet gun reform is an unattainable task that seems well beyond the reach of America.

Sadly, many politicians, gun advocates, and pundits are so protective of guns that they find more problems with the solutions than with the problem itself.  The solutions are debated and discounted, and because every single solution comes with a mountain of problems, America is trapped.  Yes, gun violence and mass shootings affect all Americans and yes, America suffers from the paralysis of gun reform.

The January 6 insurrection was also heavily militaristic with so many rioters carrying guns.  It shook Donald Trump and most of the insurrectioners to the core that a Black man came out of nowhere and could so easily become President.  Thus, “Make America Great Again” was their cry to go back to a “White Power” America, and after a troubling 4 short years, this voice of White supremacy is silenced, and a Black woman joined the ranks as the first female vice president of America.

I understand the troubled, misguided preacher’s words;  the frantic Trump-led insurrection; the murderous thugs who would spray bullets at innocent people because of their race; and the gun makers, gun lobbyists, and gun-loving politicians who have this deep unrestrainable passion to protect guns over humans.  Deep within their psyche is that sense that the gun is all we have left as a symbol of White power and supremacy, and we cannot let “cancel culture” take this too.